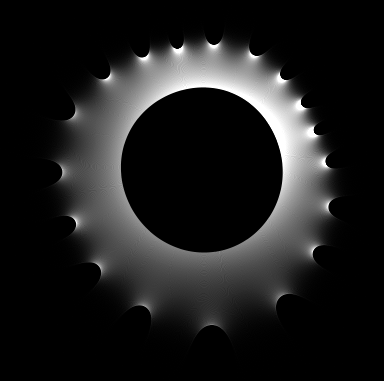 Everything you see in these pieces is generated by mathematics and programming. At no point did I interact with graphic design software—only a code editor. The custom rendering software is responsible for precisely placing millions of points, their positions governed by the simple equation above.

While this equation is well-known, it has never been explored in this way before. A mainstay of the study of chaos, the sequence of points is at the whim of the butterfly effect. Small changes in \(z_0\)—the NFT ID—result in the vastly different forms that each series takes. Every piece combines macro-level gradients, reminiscent of organic forms, with intricate microstructures revealed when zooming.

This magnification lies at the heart of the rendering engine, capable of producing exapixel resolution on demand (kilo, mega, giga, tera, peta, exa). A billion billion pixels, if printed in full at 250 DPI, these images would be larger than the area of Jamaica.

n-Body Systems Note that the governing equation knows only of the current point \(z_n\) and the NFT ID \(z_0\). Despite this ignorance regarding its history, the inherent mathematical structure in the sequence is obvious when viewed globally as an entire image. The n-body systems (Feigenbaum’s Delta, Three-Body Problem, and Crux) take this emergent behaviour one step further with multiple distinct objects, each sharing the same form despite a single \(z_0\) seed.

Scarcity The butterfly effect ensures that any change to \(z_0\) results in a different trajectory, so no two works are identical. Some pieces appear qualitiatively similar despite distinct sequences of \(z_n\)—these are sold as series of 3 editions although each member is provably unique. Artworks themselves are therefore non-fungible, much like the tokens that represent them.

Persistence Every work’s _tokenId contains all the information needed to extract \(z_0\) and generate the piece using the equation for \(z_n\), even if this site is taken down. The on-chain treasure hunt demonstrated this.

Environment The effects of cryptocurrency on the environment are well documented, and proof of work is the culprit. In contrast, this art uses negligible energy—30 \(z_0\) values were found with 3.1kWh ≈ a half-hour charge of an EV.

Named after the first series of the Genesis collection—Eclipse—Eclipsoid shares its eponym’s distinctive cavity and scalloped edges.

The second image below might look like the least ‘filled in’ of the three pieces, but it is in fact the most complex with nearly 6 million points. Its macro structure boasts an additional, unique characteristic in the form of an additional polygonal gradient wave—formed by a sudden change in the density of the points.

The name Panopticon, or the all-seeing eye, has been attributed to a wide range of concepts through history—from prison architecture to a philosophical metaphor for modern disciplinary society. Here, Panopticon is a series of ocular structures with multi-layered bands surrounding a clean black ‘pupil’.

Whilst the overall form is shared by the three pieces, the number, brightness and width of the bands varies significantly—most notably in 0xf4e4d045f9, shown in the first image below, with its unique glow emanating from the centre.

The butterfly effect is perhaps the most pronounced in the Isoceles series. Despite having \(z_0\) values identical to 14 decimal places in both the real and imaginary components, the three works differ greatly in terms of brightness and gradient shapes—although they do share their internal three-sided structure, reminiscent of a triangle with a single line of symmetry.

Despite being formed from the shortest sequences in the collection—the largest reaches a mere 1.39 million points before diverging to infinity—Pentatonic pieces offer both beautiful, cleanly defined macro structures and hidden intricacies.

Perhaps surprisingly, it is the very shortest of the series, 0xec0d91eccf, which boasts an additional feature: perfect spirals nestled between the five faded petals.

A nod to the eponymous Ethereum security vulnerability, Reentrancy pieces are so named because they resemble objects re-entering a planet’s atmosphere from outer space, distorted by atmospheric drag and aerodynamic heating.

0xc65e22c7d3 was awarded as part of the on-chain treasure hunt.

A pioneer of chaos theory, Mitchell Feigenbaum is best known for discovering two constants that express ratios in the bifurcation diagram of a non-linear map. To put it more simply, his \( \delta \) constant describes how systems branch as they approach chaos—much like the pair-of-pairs we see in this series.

Note that the two views below are in fact from the identical image, but centred on a different point to demonstrate the bifurfaction. Zooming out of either will reveal this connectedness.

A particularly pertinent example of this can be seen when applying the equation \( z_n \rightarrow z_n^2 + z_0 \) to numbers from the Mandelbrot set—with the Feigenbaum constant describing the ratio between the diameters of successive circles on the real axis in the complex plane.

Disappointingly, none of the seeds measure 4.669 million dots—the constant value—but between 4.51 and 5.46  million points, they aren’t too far away!

In physics, the three-body problem relates to computing the trajectory of three interacting bodies. Like in other n-body series, while the three bodies in each piece appear distinct they are in fact the result of a single seed. Interestingly, if you watch the progression of the numeric series, points jump between identical locations of each of the three bodies—slowly adding detail to result in the inwardly-orienting structures we see here.

Crux is named after its stellar doppelganger, the four-star constellation also known as the Southern Cross—no Australian artist's collection would be complete without one. Both are comprised of four bodies in a kite-like formatio with the largest (or in the case of the stars, the brightest) at the bottom and the rest steadily reducing in size, clockwise around the group.

0x9bc15c3f26 was awarded as part of the on-chain treasure hunt.

Starburst is the first of two archipelago-like forms in the Regenesis collection, with a deceptively simple explosive pattern made up of 138 island clusters. While each of these clusters is qualitatively similar and consistent in its positioning (as part of a line of three pairs), they differ greatly in size and density.

The second image below, magnified to a huge 32768x, shows the gradient bands within one of those clusters—and still manages to display a breathtaking level of detail despite being so zoomed in.

These pieces are simply magnificent. Beautiful forms await discovery at increased levels of zoom—from the firework-like macro structures, to the archipelagos making up each point, to the perfect spirals hidden within. One of these spirals is shown below, captured at 2097152x zoom.

Ranging between 6.0 and 7.8 million points per piece, these are the most intricate in the Regenesis collection. The best way to enjoy these pieces is to start with spiral at highest magnification, and zoom out to reveal context.